Find the material for this lecture here.

Infinitary rewriting consists of rewriting of possibly infinite terms in possibly infinitely many steps. Streams are infinite sequences; they can be specified as normal forms in infinitary rewriting, but also in many other ways. We will give an overview of them, and also present rewriting based techniques to answer basic questions on well-definedness, productivity and equality of streams, and also ways to visualize them.

Outline of the lecture

Term rewriting is usually defined by applying a term rewriting system (TRS) on finite terms, but the same TRS can also be applied on infinite terms in a natural way. But then it is natural to consider reductions of infinitely many steps, having some converging behaviour. This view changes some of the natural basic properties like termination and confluence. We will present some preliminaries of infinitary rewriting, as is also presented in [1, 2, 3].

Streams are infinite sequences over some alphabet, and can be seen as infinitary terms in which the alphabet symbols are unary symbols, and there are no other symbols. Many streams can be defined as infinitary normal forms of some finite starting term with respect to some finite TRS, but they can also be defined by a number of equations. For instance, the Fibonacci stream fib = 010010100100101… is the fixed point of the operation f replacing every 0 by 01 and every 1 by 0, and can be defined by the three equations

Typically, streams defined by equations are non-periodic, but often have a self-similar character. Sometimes this is nicely shown by turtle graphics: process the stream by which by every symbol a particular action is performed, like drawing a segment and turning the drawing direction. This is elaborated in [7]. Doing this for the fixed point of the morphism mapping 0 to 001100 and 1 to 001101, choosing appropriate turning angles yields the following self-similar turtle visualization: 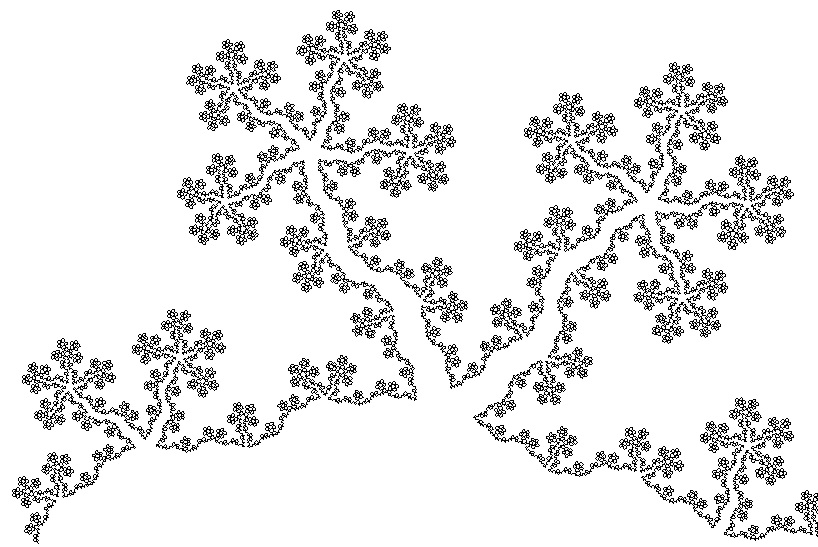 These lectures will not only consist of presenting the topics and underlying theory, but also of doing exercises in applying the underlying proof principles.